AREA Ruhr offers a structured three-year doctoral programme on Transnational Institution Building and Transnational Identities in East Asia, which is funded by the Mercator Research Center Ruhr (MERCUR). The program aims to advance knowledge on East Asian regional institution building, identity formation, and the interaction between both processes throughout history up until today. By applying transnational and comparative approaches to the study of East Asia, the programme looks beyond national borders, seeking to unleash the potential of combining humanities and social sciences, as well as to base research projects on interdisciplinary perspectives. Participating scholars allocate their research within three larger sub-themes related to transnationalisation. These are:

The transnational movement of labour in East Asia has a long history; for example, the streams of Han Chinese migrants that populated the Chinese North East (Manchuria) in the late 19th and early 20th centuries contributed to the industrialization spurned on by Japan’s colonization drive. In today’s East and South East Asia, migrant labour forms the cornerstone in the strategic development of Chinese, Japanese and South Korean transnational companies. Cross-border labour mobility is in many cases regulated by states, but also often takes irregular forms.

The research on transnational labour focuses on historical and sociological analyses of labour mobility across territorial borders in East Asia, also including related flows into and from South East Asia. The research will critically appraise any protean uses of national and ethnic categories in order to avoid “methodological nationalism.”

The research within this sub-theme will examine 1) individual and situational utilization of historical (including colonial) legacies, ethnic difference, and social structures in emerging patterns of migration and work in the region, and 2) the emergence of novel labour market institutions based on identity and status.

Doctoral students will be encouraged to either conduct comparative research or to focus on the interaction of workers across territorial borders. Research projects may have a historical or a contemporary focus, and in addition to East Asian perspectives, may also include South East Asia and/or Europe where applicable.

The geographical proximity of East Asian states suggests cultural and historical affinity, yet also mutual tension, even animosity, refracted through the lens of nation-states; in consequence, mutually shared identities and universal concepts of the East Asian region remain evasive.

The research within this sub-theme focuses on regional institution building between East Asian states and their fledgling institutionalization. Questions of institutional change and stability, emergence of shared interests, identities and capacity for global action will stand at the centre. Research may address how non-state actors cooperate across territorial divides against the backdrop of diverging visions of a future regional order and historical remembrance; it may examine the degree to which cooperation may contribute to a changing and more consensual sense of history.

The studies in regional institution building will examine how East Asian actors interact with existing and build new institutions across the region. The approach should be interdisciplinary, combining perspectives from among economics, political science, political economy, and history.

Doctoral students should in their examination of regional developments draw on the impact of existing East Asian transnational institutions and dynamics, and on forces outside East Asia where applicable.

East Asian identities and institutions, in essence both local and universal, incorporate accretions of transcultural world views and cultural practices diffused across East Asia throughout history. Their local adaptations served as tools for the assertion of local distinction as well as territorial and (proto-)national claims and identities. The diffusion of Chinese script and its adaptation in distinct forms across East Asia is a case in point, as well as the rise of Buddhism in East Asia, which had wide implications both for the spread of universal cultural and political patterns and the formation of distinctively local institutions.

The ambiguity of religious institutions in terms of universal and local (in particular nationalistic) claims is widely recognized. The span of Tibetan Buddhism across vast territories, the transnational role and branding of Foguang Buddhism and the political involvement of Japan’s Soka Gakkai sect are examples. Ethno-centric varieties of (Neo-) Confucianism in Japan, China and Korea have played important roles in history, and have today for example also spawned influential business management doctrines.

Official and popular applications of Confucian literati culture continue to be an important source of exceptionalist, national self-assertion throughout East Asia, while at the same time East Asian cultures remain wide open to the import and purposive adaptation of “foreign” religions, world views, and cultural practices ranging from Christianity to Marxism.

Doctoral students engaging in this sub-theme are encouraged to critically examine processes of identity formation and institution building in East Asia across disciplinary and territorial borders.

Year I: Doctoral students focus on their course work which deals with theories and methods necessary to study transnationalisation. Classes include weekly seminars offered by a team of AREA Ruhr professors such as on Disciplinary Perspectives on Transnationalisation (winter term) or Methodological Approaches to the Study of Transnationalisation (summer term). Besides, doctoral students take courses at the RUB or UDE according to their individual needs. Moreover, throughout the three-year programme AREA Ruhr organizes a guest lecture series based on the doctoral students’ suggestions for invited speakers. At the end of the first year, they introduce their individual research projects at the “Proposal Workshop” to get feedback from a wider audience, including their two supervisors (one each located at the IN-EAST and the OAW) as well as international experts.

Year II: Doctoral students leave for their five months field trips to Asia. Their research abroad is preceded by a joint fieldwork retreat at an Asian partner institution where they receive training in conducting research in East Asia and the opportunity to build personal networks. After their return to Germany doctoral students present their revised and extended projects at the Preliminary Results Workshop in late spring.

Year III: Doctoral students concentrate on writing their thesis. As in prior semesters they are encouraged to take additional training and career development courses offered by the RUB Research School , the UDE’s Graduate Center Plus , or the Research Academy Ruhr. 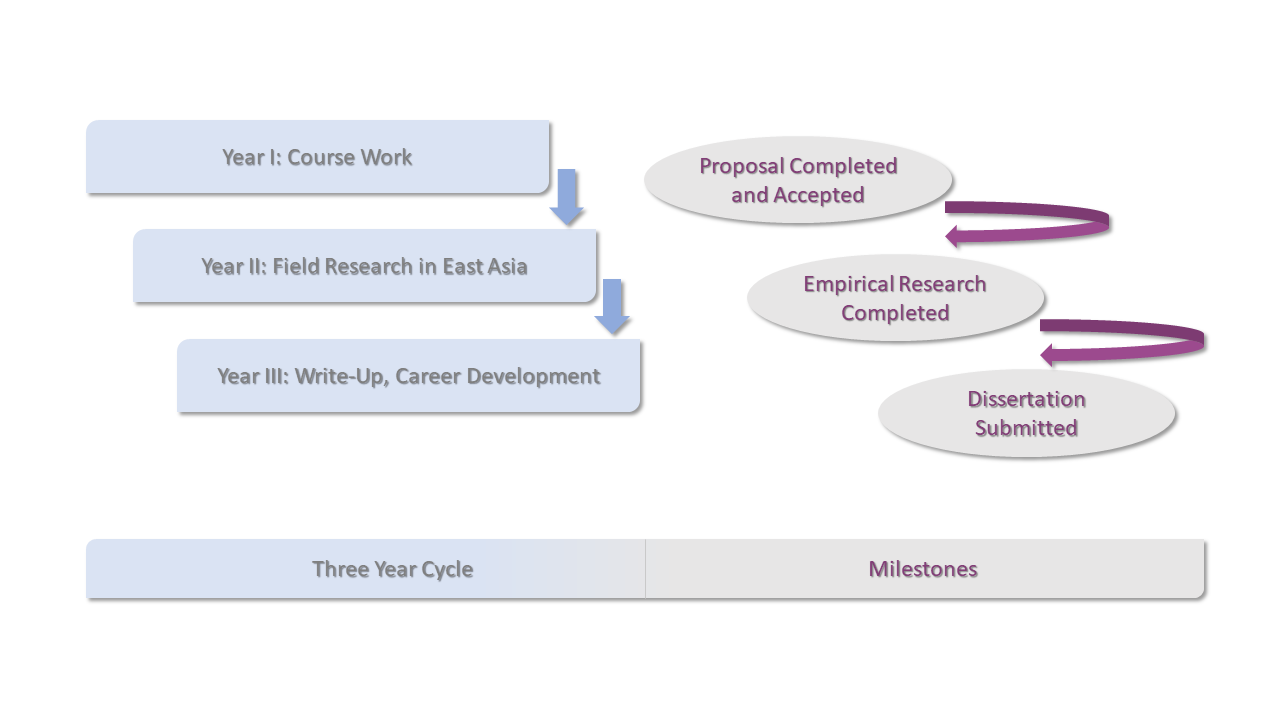 The doctoral programme is managed by its governing board: its speaker Prof. Dr. Dr. Nele Noesselt, AREA Ruhr’s two co-directors, and two doctoral representatives as well as AREA Ruhr’s two managing directors as non-voting members (see AREA Ruhr governing board). Meetings are conducted in conjunction with AREA Ruhr’s governing board consultations. All doctoral students have a team of supervisors who cooperatively provide guidance and support through regular joint meetings. In most cases, one of the supervisors belongs to the Institute for East Asian Studies (UDE) and one to the Faculty for East Asian Studies (RUB). The doctoral programme is coordinated and managed by AREA Ruhr’s office team.