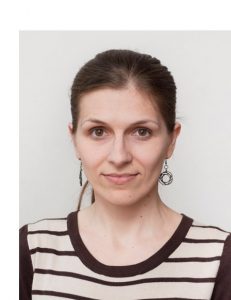 Eugenia has a long record of teaching Japanese in Ukraine. Her research concentrates on the image of Japan inside and outside the country in literary works of British, American, and Japanese authors. While her research solely focused on the literary domain at first, her research at Nagasaki University looked at literary work from a cultural and social perspective as well. Eugenia’s research interests are Contemporary Japanese Studies, Japanese Literature, Comparative Literature, Imagology, as well as Literary and Cultural Representations.

During her fully funded fellowship at AREA Ruhr, Eugenia plans to focus on the concept of “forever foreigners” in 20th century Japan as represented in the novel Pachinko by Min Jin Lee, an American author of Korean background. The novel deals with a wide range of historically embedded topics, encompassing the complicated relationship between Japan and Korea – more specifically, life of ethnic Koreans in Japan through the periods of colonial Korea, World War II, the Allied Occupation of Japan, the Korean War, as well as during the Japanese economic miracle and “bubble economy”. Looking at the whole 20th century allows Eugenia to identify the multi-faceted images of Japan that are culturally and historically grounded – and at their evolution – as they were generated through the eyes of Korean migrants over time.

Eugenia plans to give a lecture in AREA Ruhr’s Occasional Guest Lecture Series during her stay. Moreover, she is interested to contribute to Japanese course material for hybrid language classes which are in the making based on AREA Ruhr’s HELLP (Hybrid East Asian Language Program) Project and other activities in the field of East Asian Studies at RUB and UDE

In mid-May Eugenia received a job offer from Nagasaki University in Japan (where she studied before) at short notice; congratulations!
We look forward welcoming her again to the Ruhr region in the context of an an AREA event or initiative in the future.